At the roof of the world lies a region of China well known around the world for its Buddhist temples and monasteries, as well as its unique culture and people. Tibet Autonomous Region, which lies on the Qinghai-Tibet Plateau, is famous also for its mountains and lakes. This beautiful region is the world’s largest and highest plateau, with an average elevation of just over 4,000 meters above sea level. There are even parts of the region that are so remote that they are still mostly uninhabited due to the extreme climate and altitude.

Being on the world’s highest plateau, Tibet has as its border with Nepal the Himalayan Mountain Range, which is home to the world’s tallest mountain, Mt. Everest. At 8,848 meters (29,029 feet), it is a sight that almost every visitor wants to see, and tours are easily available to visit Everest Base Camp (EBC). There are many other mountains that can be visited, and the scenery of the plateau is wholly unique. Tibet has some of the largest freshwater and saltwater lakes in the world, and an abundance of wild animals that can be seen from the trains and roads as you travel to Tibet. It also has a monsoon season, which turns what looks like an arid landscape into areas of lush, green grasslands and colorful plants and trees. 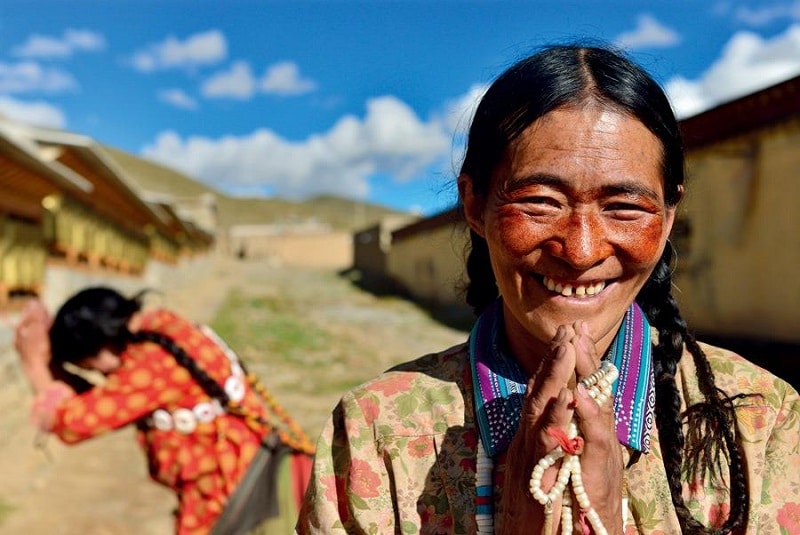 Tibet is a huge draw for tourists from all over the world, who come to see the unique culture and visit the monasteries, lakes, palaces and walk among the world’s tallest mountains.

Tibetan culture is much the same as it was a thousand years ago, with a few small exceptions. Tibetans are mostly Buddhists, and the religion is followed very closely, with celebrations and festivals held across the region, and almost all of the people attending temples and monasteries to pray. One of the biggest tourist attractions in Tibet is the huge number of monasteries, temples and holy sites. Visitors come from all over the world to see the ornate, classic temples and walk around the ancient koras, or pilgrim routes, around places such as Jokhang Temple in Lhasa. For those with a more sturdy constitution, and a more adventurous inclination, the kora around the holy Mt. Kailash is a trek that brings immense satisfaction on completion.

Set in the center of Old Lhasa Town, Jokhang Temple is one of the top sights to see when visiting Tibet. Historical records date the temple back over 1,400 years to around AD 647, when it is reputed to have been suggested by Princess Wencheng, daughter of the Chinese Emperor, Taizong, in the Tang Dynasty. The temple has undergone immense renovation over the last 600 years to become what it is now, with many added halls, statues and dormitories. The temple is also the home of the 1.5-meter-tall statue of Sakyamuni, which was brought to Tibet by Princess Wencheng, and moved into the temple itself, from outside, several centuries later. The statue is the object of thousands of pilgrims who travel there every year to prostrate themselves at its base. 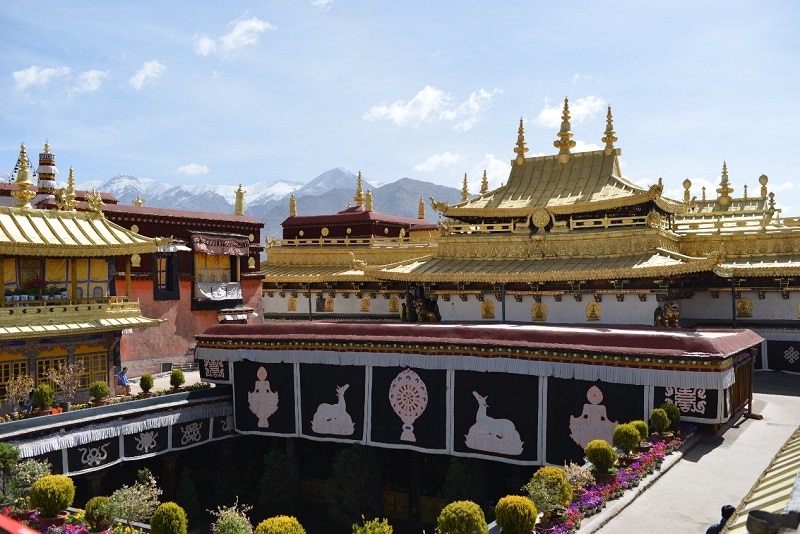 For the avid photographer, Jokhang Temple is a beautiful shot, and photographs can be taken inside, although the use of flash may be restricted. The best shots of the temple are that of the statue, the golden roof, and the impressive entrance at the front of the temple. This can often be shot from a little way back, to include the stream of pilgrims that can be seen prostrating themselves in front and spinning the ever-present prayer wheels. The golden roof is best shot in the morning, when the sun lights up the front, and the Potala Palace can be seen clearly in the background.

Potala Palace, which can be seen set on the hillside behind Jokhang Temple, is the official winter residence of the Dalai Lama. Since the 14th Dalai Lama fled to India in 1959, it has become a museum and is listed as a World Heritage Site. Built on the site of the Red Palace of Songtsan Gampo, it was constructed by the 5th Dalai Lama in 1645 as the seat of the old Tibetan government, and took around 45 years to complete. 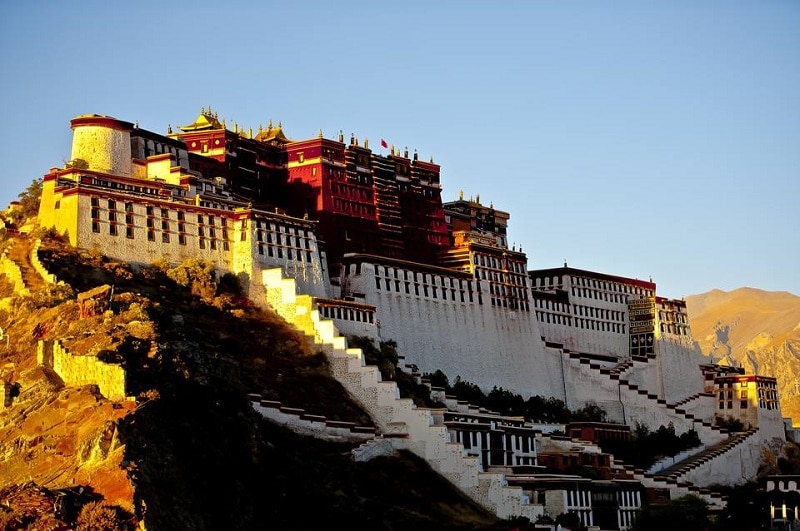 The highest ancient palace in the world, Potala Palace’s highest point is 3,750 meters above sea level. Thousands of visitors and pilgrims travel to this site every year to gaze on its wondrous architecture and pay homage to the symbol it stands for.

The structure stands in two parts; the Red Palace, which is the house of prayer and religion in the Palace, and the White Palace, which was the home of the Dalai Lama, and still houses the offices of the local Tibetan government.

The palace contains some of the most important artifacts from Tibetan religion and history, including statues, sculptures and wall frescoes. The roof of the Red Palace is composed of seven roofs made of gilded bronze and the holy stupas of the previous Dalai Lamas.

The best photos of this amazing palace have to be taken from afar, to encompass its full majesty. Chakpori Hill, to the southwest of the palace, is the best place to get that amazing shot. Photos are strictly forbidden inside, as it is a very sacred site to the Tibetans. Liquid is also forbidden inside, so take a drink before going in. Time is limited to one hour each person, so you should not get too thirsty while touring around the halls.

At the foot of Tatipu hill on the northern outskirts of Lhasa is Sera Monastery, one of the three most famous monasteries in Tibet. It belongs to the Gelugpa sect of Tibetan Buddhism, and was founded in 1419 by Tsong Khapa. The name, in Tibetan, means “wild rose”, and was named for the wild roses that bloomed on the hill behind it during its construction. 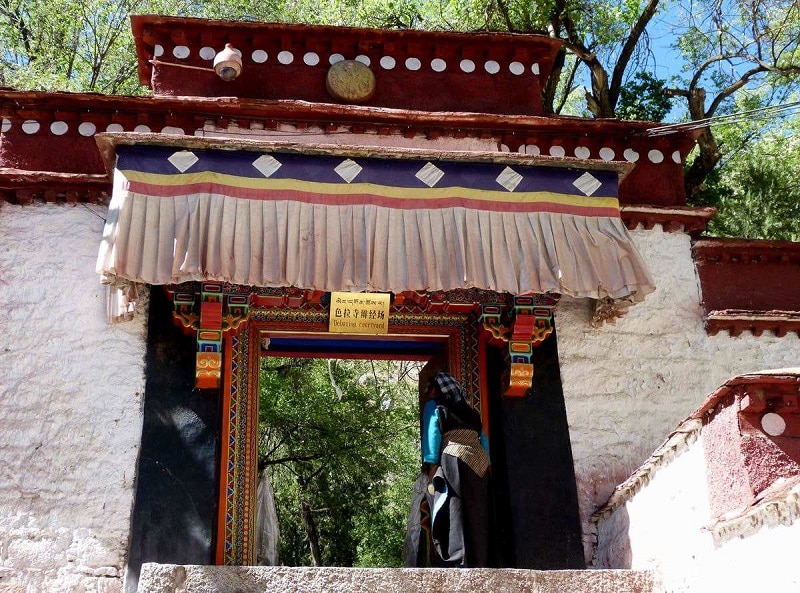 Sera monastery is the home of the Gelugpa sect, which studies the Buddhist doctrines through a step-by-step process. Initiates are required to take part in religious and spiritual debates (15:00 begins )to further their learning, and these monks can be seen every weekday in the special debating field, where they present their arguments with vigorous hand gestures, clapping, pushing and plucking of their prayer beads. It is a sight not to be missed for anyone visiting the monastery. Photography is allowed within the monastery, for a reasonable fee. If you are taking photos of the monks, it is respectful to pay a little money.

At the foot of the Gambo Utse Mountain, 5km to the west of Lhasa, lies Drepung Monastery. One of the three “Great Monasteries”, which includes Sera and Ganden monasteries, and was first established in 1416. It soon became the mother temple of the Dalai Lamas, and was the residence of the Dalai Lamas until the 5th Dalai Lama moved the seat of government to Potala Palace. 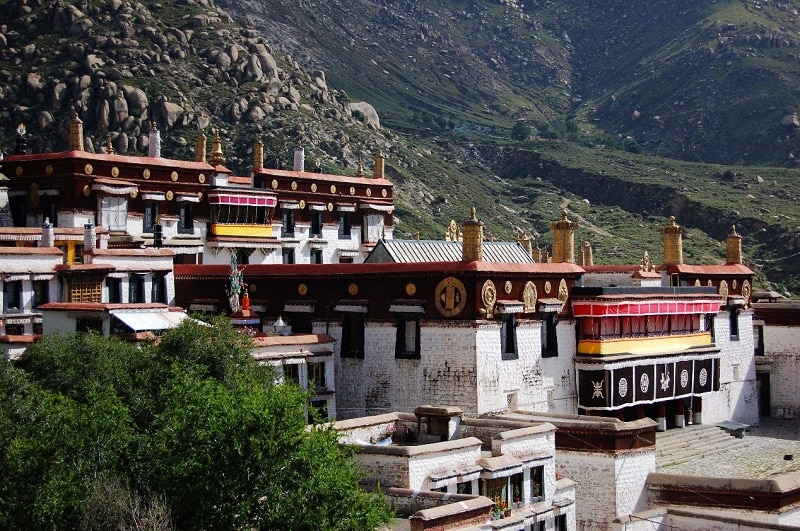 One of the highlights of the Drepung monastery is the Thangka Unveiling during the Shoton Festival in August. The Thangka, a huge painting on fabric depicting the images of Buddha, is rolled out for pilgrims and visitors to admire and pray under. The Thangka measures 20 meters in width and around 30 meters in length, and is one of the biggest Thangkas in Tibetan culture. The best place to photograph this is from the hillside opposite the frame where the monks unveil it.

As with all temples and monasteries in Tibet, when entering you must remove your hat, and only travel around the halls in a clockwise direction. You can follow the pilgrims that are touring the monastery, as they always follow this clockwise “kora”. it is also best to visit in the morning, as the monasteries are often closed in the afternoon, awhile the monks hold their debates in the shade of the trees in the gardens.

On Wangbur Mountain, on the southern bank of the Lhasa River 47km from Lhasa, sits Ganden Monastery, the first or prime monastery of the “Three Great Monasteries” of the Gelugpa sect. Established in the 15th century by Tsong Khapa, the layout of the monastery is built on the principles of Dharma. 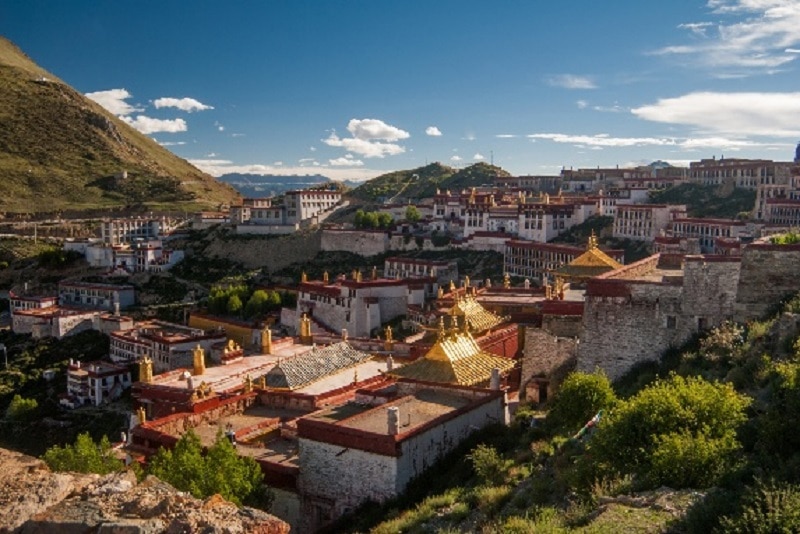 It is the home of Tsong Khapa, and the place where he lived and died, as the first abbot of Ganden Monastery. It is also famous for the Buddha painting Unfolding Festival – a Thangka Unveiling – which draws in thousands of visitors and pilgrims every year. To get a photo of the entire monastery, which covers a huge area, it is best to climb the hill opposite.